Sikkim is a non-coastal Indian state situated in the Himalayan  mountains. The state is surrounded by Nepal to the west, China’s area to the north and east, and Bhutan to the east. It is famous for its beauty and exile, the place is more beautiful than heaven. We offer wonderful holiday packages in which you can enjoy exotic  Gangtok, Nath la, wild life sancutries, yuksom and the  Dzongri trail, Ravangla, namchi, zuluk and many more. So once you visit, its beauty and charm will remain in your memory forever. These places are known as best in Hindu tradition. The place is also famous for its cuisine  dishes such as thukpa, chowmein, thanthuk, fakthu, gyathuk and wonton are common in Sikkim. Steamed dumplings filled with vegetables,buffalo meat or pork and served with soup – are a popular snack .You will enjoy the trip without any doubt so one must not delay in visiting these ancient temples.

Fairs and Festivals in Sikkim 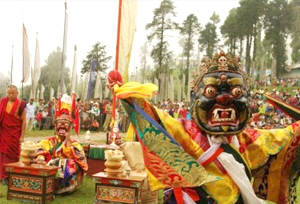 The people of Sikkim celebrate most of the festivals with zeal and enthusiasm. Buddhism is the religion which most of the Sikkim population follows, though they also celebrate many Hindu festivals like Dasain/ Dusshera, Tihar/ Diwali, Saraswati Puja, Maghe Sakranti, Janmastami, Vishwa Karma Puja, Holi and Ramnavami. Since most of the population follow Buddhism, they celebrate festivals like Saga Dawa, Lhabab Dhuechen, Drukpa Tsheshi, Phang Lhabsol, Losoong, Losar, Bumchu, Trungkar Tshechu, Kalchakra Puja and Kayged Dance with great fervour.

With over 5000 flowers found here, Sikkim hosts the International Flower Festival every year in the months of summer (March to May). This carnival is hosted to celebrate the region’s ecology and put India on an international platform. The tiny state of Sikkim has around 600 species of orchids, 240 tree species and ferns, 150 varieties of gladioli, 46 types of rhododendrons along with a variety of magnolias and many other foliage plants. The main flowers on display are orchids, gladioli, roses, cacti, alpine plants, creepers, climbers, ferns, herbs, etc. The festival is worth a visit for all the nature lovers who want to get enveloped in the fragrance of the newly bloomed flowers.

Discover AdventureSikkim is an ideal destination for all the travelers who want to quench their thirst for adventure. White water rafting, trekking, yak safari, mountaineering, mountain biking- name it and experience it in Sikkim. Adventure sports in Sikkim are a treat for all the voyage junkies. Whether a tourist wants to trek on old silk routes or wish to experience white water rafting in the Teesta River, adventure sports in Sikkim have something for everyone. A wonderland of adventure, Sikkim offers a wide array of adventure sports. Other famous sports which are practiced in Sikkim are archery, paragliding and hang gliding. 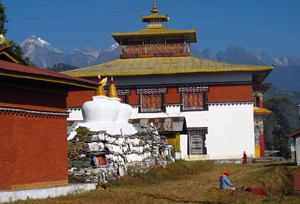 The enchanting beauty of Sikkim is always mesmerizing and bewitching. Since the culture of Sikkim is inherited from Tibet Buddhist, monasteries form an integral part of the state. At present, Sikkim is home to more than 200 monasteries. Famous monasteries in Sikkim are Rumtek (overlooking Gangtok), Pemayangtse (Pelling, West Sikkim), and Tashiding (West Sikkim). Other than these monasteries, the list also includes Karma Kagyu monastery with its 200 year old murals (North Sikkim), Enchey monastery (Gangtok), and Sangachoeling Monastery (Pelling). These monasteries are adorned with beautiful sculpture and frescos. Monasteries in Sikkim are a storehouse of Tibetan manuscripts, exquisitely carved wood work and icons of silver and gold.

ther then monastery, Sikkim is a home town of many religious temples as well. Imagine a 108 ft long statue of Shiva, enclosed with 12 Jyotirlinga (temples) amidst the mountains! One can see the models of sacred Chardham and an 18-feet statue of Kirateshwar (reincarnation of Lord Shiv) at Siddheswar Dham.

Flora and Fauna in Sikkim:Charming mountains, historical monasteries, lush green valley, Sikkim is an ideal retreat for every tourist. Other than its beauty, Sikkim offers a perfect getaway in the midst of memorable sunrises. Despite being the second smallest state in India, wildlife in Sikkim covers a huge variety of animals. The alpine forest of Sikkim is an ideal habitat for most of the extant species like the Snow Leopard, Himalayan Black Bear, Red panda, Musk Deer and Blue Sheep. If a tourist wants to catch a glimpse of colorful birds, then Sikkim is home to many extinct and endangered birds as well. Sikkim holds the status of being the best state in India in terms of rural tourism. The state is renowned for its astounding variety of 450 bird species, 400 species of butterflies, 450 types of orchids, and 40 species of rhododendron.

Come and explore much more about this blessed state, as holidaying here can be an unbeatable experience!